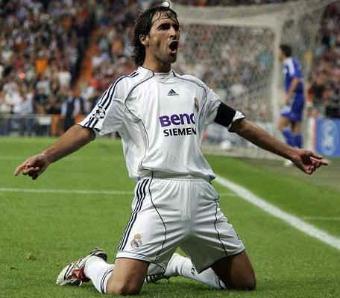 One of the best players in the history of soccer is the Spanish forward Raul. Raul is currently playing for the German club FC Schalke 04 after he had to leave the Spanish powerhouse Real Madrid. He was pretty forced to leave after they didn't want to sign a new contract with him. I think that was a big mistake from Real. Raul who, before he joined Schalke have spend his whole career with Real Madrid stand for tradition and professionalism that you cant buy for money. He is a leader on and of the field and even though he is not scoring that many goals anymore he contribute with something that is so important. Tradition of what the club stands for, its values and norms. Like I said professionalism and winner mentality.

He is also the most successful goalscorer in the Champions League with 71 goals in 143 games. He has won the tournament three times with Real Madrid and multiple times ha has won the league with the with Powerhouse Real.

Read more about the Spanish forward Raul at: http://en.wikipedia.org/wiki/Ra%C3%BAl_Gonz%C3%A1lez

Wath him in action and notice how good goalscorer he is: http://www.youtube.com/watch?v=ov18UMkHLn4