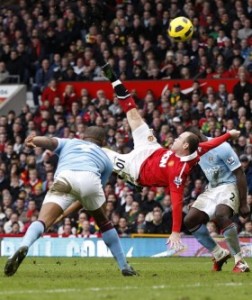 Manchester United won the second derby against Manchester City saturday morning and showed once and for all who is NR1 in Manchester and the league.

I have been a United fan my whole life and and have seen many good players represent the club. But it is two players I like more than others. David Beckham and Wayne Rooney. Beckham doesn´t play anymore for the Club but is still a hero for many United fans. Rooney is for me the best player in the world right now, in my opinion ever. He has the whole package: quality, skill, speed, physique and heart, and he still improve his game every season. Lately as a goal scorer. Against City he scored the match winning goal with a bicycle kick. Fantastic goal! You can see the goal on the link here and you will understand what I mean. http://www.youtube.com/watch?v=55_m5-8rQm0

See United beat their rivals is fantastic. The biggest rivals has always been Liverpool and Arsenal, since City struggled with their performance and been playing in the second division for a long time. That changed when City got new owners. They simply bought a completely new team and made City over a night a competitor to win the league, and one of Uniteds biggest rivals again. One of the players they bought is Carlos Tevez. They bought him from Manchester United. The forbidden move. That makes the win even better. Show them which team that is Nr1 in Manchester and England. The Big Brother.

Read more about the game on Manchester Uniteds official webpage on the link:

1 thought on “United is still NR1 in Manchester”