I am so happy right now of the news that it is official. Peter Forsberg signs with the Colorado Avalanche. 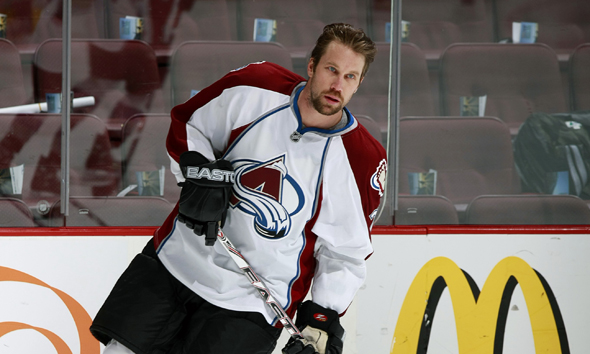 Forsberg is, if not the best hockey player Sweden ever had certainly one of them. In my opinion he is one of the best players who ever played the game. He has won everything that is possible to win. Two Stanley Cups, two Olympic gold medals, two World Cup gold medal and NHL MVP. He is one of the greats and it is awesome that he is back in the show again.

I grew up in Sweden with watching Forsberg play for the Swedish team MoDo and after that watching him play in the NHL for the Colorado Avalanche.  Forsberg has always been my favorite player and I have followed his career closely. You can say a lot about Forsberg as a player and describe why he is so good. I have always admired his attitude that always work hard, be a team player and give everything you got to win the game, and always be humble.

I hope his problems with the foot is solved and he can concentrate and play hockey as he used to. Before this injury he was at the top of his career. Had won everything that is possible (mentioned in the beginning) and had many years to go. But this problems have been stopping him from playing and many people have missed him (ask the Avalanche fans.) Like I said I really hope his problems is solved once and for all so we can enjoy one of the best players in the history on more time.

Watch some magic from Peter Forsberg in the final of the Olympic games in Lillehammer 1994:

The last time he played in the NHL and with the Avalanche was in 2008. That time he only played 16 games (7 in the playoffs) before the foot started t